Connect with friends and the world around you on the Santee Locals network.

See photos and updates from friends in Activity Stream

Santee is a suburban city in San Diego County, California, with a population of 53,413 at the 2010 census. Although it is a part of the East County region, Santee is located just 18 miles (29 km) from the Pacific Ocean. The city is connected to the coastline by State Route 52, a six-lane freeway that runs from Interstate 5 in La Jolla to State Route 67 in El Cajon. The city is bisected by the San Diego River, a linear greenbelt that includes parks, trails and more than 1,100 acres (450 ha) of natural riparian habitat.

The region was the homeland of the Kumeyaay people. These original residents established the village of Sinyeweche on the banks of the San Diego River in the present day Santee area.[7]

The city is named after Milton Santee, the second husband of Jennie Blodgett, whose first husband was George A. Cowles, a pioneer rancher and businessperson in the San Diego County area.[8]

In 2010, the city was populated by 19,272 households, of which 64 percent had incomes greater than $45,000 annually.[citation needed] In 2009, the median household income was $78,872 per year, according to the San Diego Association of Governments. In 2010, Santee had one of the lowest crime rates among cities in San Diego County.[9] Unlike most of the county's coastal cities, Santee still has sizable portions of vacant land suitable for development. It is a growing suburban community that in recent years has added upscale housing, a major corporate business park and expansive shopping centers, along with a destination recreational complex called Sportsplex USA Santee.[10] 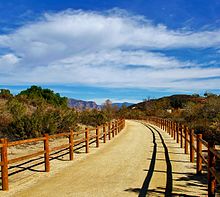 Outdoors: In addition to being a popular spot for mountain bikers, the city hosts a popular Southern California rock climbing venue called Santee Boulders.[12] Santee Lakes[13] Regional Park and Campground offers 190 acres (77 ha) for fishing, camping, bird watching and picnicking. An unincorporated hiking area just north of Santee is popular for mountain bikers. It has entrances at Prince Valiant Drive and Princess Joann Drive and includes many trails that extend to Poway and Santee Lakes, as well as a boot-shaped rock on a slope, unsurprisingly nicknamed “Boot Rock”. In 2035, a community named Fanita Ranch is expected to be built in that area, requiring Magnolia Avenue and Cuyamaca Street to be extended northbound.

Golf: A local landmark since 1958, the Carlton Oaks Golf Course and resort offers a premier golfing destination.[14] The course was designed by the legendary Pete Dye,who is in the World Golf Hall of Fame.

State Route 52 was extended eastward through the city from its former terminus at State Route 125 to State Route 67 on the city's east side. The city is bisected by four main thoroughfares: Mast Boulevard and Mission Gorge Road traverse east and west, while Magnolia Avenue and Cuyamaca Street cross north and south. Santee also is the eastern terminus of the San Diego Metropolitan Transit System (MTS) Green Line trolley route, which connects East County to Old Town and downtown San Diego. MTS also provides bus service. Gillespie Field, the oldest and largest of eight commercial aviation airports operated by San Diego County, is located on Santee's southern border with the city of El Cajon. The airport serves as a hub for local businesses. Also, while not public transportation, a classic 1960s or earlier Dodge Dart Coupe is often found street-parked on Cottonwood Avenue between Buena Vista Avenue and Gienke Lane.[17]

The 55 acres (22 ha) Town Center Community Park is located east of Cuyamaca Street along the San Diego River. The center of the park features a 15 acres (6.1 ha) sports field complex operated by Sportsplex USA Santee, and an aquatics center operated by the East County YMCA. The park's first two phases were completed in the fall of 2010. The $23.5 million facility was funded through a combination of redevelopment bonds, developer impact fees and grants.[18]

As of 2011, the city had completed about half of a 4-mile (6.4 km)-long riverfront trail system that will eventually connect with trails in Lakeside and Mission Trails Regional Park.

Located on 15 acres (6.1 ha) in Santee is the Las Colinas Detention Facility,[19] which serves as the primary point of intake for women prisoners in San Diego County. It began as a juvenile facility in 1967 and was converted to an adult women's institution in 1979.[20]

Santee, which is 345 feet (105 m) above sea level, shares the northern part of a valley with the city of El Cajon. The city is bisected by the San Diego River, which flows east to west for approximately 4.2 miles (6.8 km) within the city limits. Hills form a natural barrier on its northern and western sides.

Gillespie Field and Airfield Park act as a southern border with El Cajon. Prominently overlooking the western side of Santee is Cowles Mountain. This natural landmark, which is the highest point in the city of San Diego, offers sweeping views of the county and is a popular hiking destination.

According to the Köppen Climate Classification system, Santee has a semi-arid climate, abbreviated "BSk" on climate maps.[21]

There were 18,470 households out of which 40.9% had children under the age of 18 living with them, 57.7% were married couples living together, 13.0% had a female householder with no husband present, and 24.1% were non-families. 18.2% of all households were made up of individuals and 6.9% had someone living alone who was 65 years of age or older. The average household size was 2.81 and the average family size was 3.19.

As of 2017, the Santee City Council was composed of Mayor John Minto and council members Stephen Houlihan, Ronn Hall, and Rob McNelis and Brian Jones.[25]

San Diego Christian College moved to Santee from El Cajon in early 2013. The college, which offers 15 degree programs, is accredited by the Western Association of Schools and Colleges. The college has approximately 475 students and 28 faculty members, but hopes to expand to as many as 1,200 students. [28]

There are two high schools in Santee. Both are part of the Grossmont Union High School District.

On March 5, 2001, 15-year-old Charles Andrew Williams opened fire in a boys' bathroom and a grass quad area at Santana High School. Two students died and thirteen students were wounded. He pleaded guilty to the shooting and was sentenced to 50 years to life in prison.[29]